It was not the best night to going out to a meeting, but it turned out to be one of the most interesting presentations we have had all year.

Carolyn welcomed everyone but said that we would not be getting a drink tonight as unfortunately we had not received any volunteers to look after the tea and coffee when Laurie was unable to attend!

Tonight, Roger Goodridge introduced Ken Davis who explained that he was a gun stock maker and repaired telescopic sights.

He had started off in Tasmania in the 60’s making his first stock for the gun used on his parents farm, and by 1983 was working full time making gunstocks for all sorts of weapons. Ken spoke about his involvement with shooting and that anyone serious about their sport, soon found the benefits of having a stock made with that perfect handmade fit.

The pictures of his workshop at home showed how he had adapted vices, repurposed machinery and specialised hand tools still the same, but subtly different to those we are all used to working with. 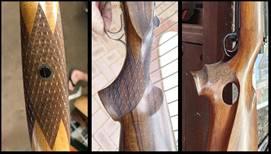 Ken talked about how he selected timber to provide strength but also “figured” for its look, the hand work to fit the mechanisms, the subtle shaping of every piece to suit the customer and the inlay and decorative work both for decoration but also extra grip.

We found out that Southern French walnut was his preferred timber and that after shaping and initial sanding, he would use water and 360 grit to raise the grain and finish off with 600 grit to remove the furring, even mixing talc powder into a slurry to fill all the pores and wiping it off with newspaper!

When asked about which finishes he used, Ken said he gave his work multiple coats of Organoil decking oil as he had found that this not only would stand up to the hard use that some of his stocks got but could also be repaired or refurbished if necessary.

Many thanks Ken to you and your son for an interesting presentation and insight into a profession that many of us would never even know about. 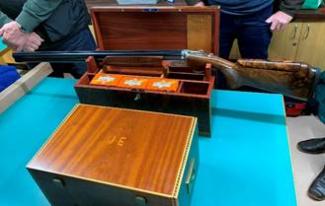 Martin Burgoyne had brought along two examples of “Gun maintenance” boxes that he had made for friends involved with shooting. These boxes were initially used for carrying all the gun cleaning equipment but were also used to support the weapon whilst working on it. To illustrate this effect Martin’s friend Richard had brought along his beautiful Italian made gun for us to admire.

The box was made with book matched walnut veneer, quadrant hinges and a Crawford/Hawthorne lock together with toolbox catches to lock the drawer once the lid was closed. A special placque was made and screwed inside the lid with the owners details, with assistance from Len Starkie in using the manufacturers unique font.

We did take a break in the middle of all this, to talk with the presenters and look at the boxes but sadly NO TEA.

Approval given to increase size of Melville Wood Turners shed

Dennis Tapley told us the Melville Woodturners had been given approval to extend their shed and showed us the plans that increased the hall to nearly three times its present size. They hoped to have this finished in about 18 months.

Finally, Ian Houghton told us that he had been restricted by home detention and to fill in the time had used a scroll saw to produce three decorative panels.

What we saw were three beautiful, veneered panels depicting different types of eucalyptus leaves, Lemon Scented Gum, Coastal Blackbutt and normal Blackbutt, to the standard that we have come to expect from Ian.