Well, that was not the meeting that we wanted!! Without contact from our organised presenter we had to make alternative arrangements at short notice.

Allan Waugh got the meeting started by explaining that he and I had been visitors on the final day of the Collaboration workshop and that had inspired him to try something different and to try his hand at embellishment.

We saw a small bowl he had turned and explained that to make a decorative feature he had wrapped it in red cotton before applying the final finish. It just goes to show that we should all be open to try something different.

He had also made a Japanese mitre joint that he handed around the meeting, and even when we were told that it only went together at 45 Deg. many of us had difficulty in pulling it apart! 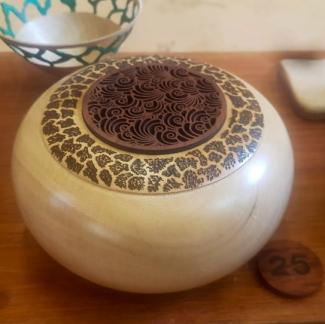 Kevin Luff then explained that he was part of the Collaboration group which was held in Bunbury every second year and usually invited overseas experts to run workshops in many different techniques, which would add to their members skills and another dimension to their projects.

On the alternative years they get together for a four-day workshop at the Forest Discovery Centre in Dwellingup which is where they were during this October and where we caught up with them.

Then after lunch on the last day all the items are auctioned off to raise funds for the next workshop.

Alan Waugh and I had been kindly invited to join them for lunch and to see what they had produced. 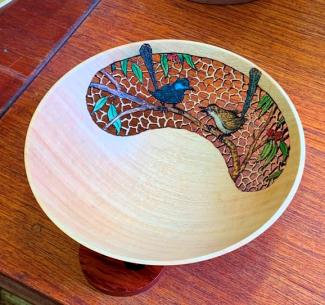 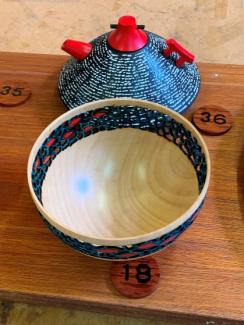 The items on display were truly inspiring and they should all be congratulated for their efforts in lifting the level of all woodworking in WA.

We will put the pictures on our web site, or you can see more of their work here: 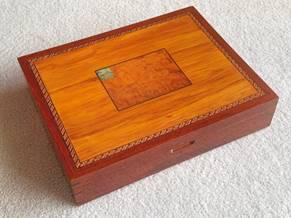 I followed Kevin’s presentation with a discussion on “How not to take shortcuts!”

Now having seen Martin’s Japanese Incense box last month followed by Warren’s beautiful jewellery boxes, I had to say, “That’s not the real world” and that the rest of us produce Emm…. shall I say more modest examples of box making.

Tonight, I brought along an example of what not to do when things go wrong. The original concept was not a problem and the basic box completed as usual but attempting to inlay in a rush is never a good idea, and I ended up spoiling the oak veneered top.

Six months later, I dragged it out of the corner, removed and relayed a different veneer to the top and then decided it needed an extra inlay with added Paua shell.

Repeating the previous mistake, this was lightly clamped but without support inside! Surprisingly, the box lid “bowed!”

Six months later out it came again, this time to be levelled with “crystal clear casting resin” which involves lots of work with a cabinet scraper and sanding, only to find that I could now see through the top edge of the original veneer!

Did I mention that I tend to throw things?

Six months later and a bit of delicate paint work and it does not look TOO bad (I just need to find someone with poor eyesight I can give it to) so another couple of coats of poly on the top and….. is that a couple of tiny spots where I can see the veneer on the inlay is lifting!!!

The moral of this story of “box making 101” is “Don’t take shortcuts or do things in a rush”. You do know better, and it never ends well!

We then stopped for a cup of c tea or coffee and time to catch up on the latest conversation with each other. The time we spend socialising and talking together over a drink, is essential to who we are as a group! It is what we do, it’s when we find out from other members how to fix what we are doing or to get current ideas.

Further to our trip to the Forestry Centre at Dwellingup we did inspect their workshop and accommodation with a view to running two-day workshops there and Carolyn wanted to know what the response would be from the members regarding running them in the new year.

Everyone put forward ideas and were quite positive to the idea of two-day courses away or even weekend workshops in the Woodturners meeting rooms when possible?

These will be discussed at our next committee meeting and added to our programme for next year.

Then Paul Birchall gave us a brief run down on the availability of decent quality box hinges, he spoke about the different types that he could find with the ability to “hold open” at around 90 deg, and said that suppliers and quality were constantly changing.

Whilst the absolute best was still available from suppliers such as Andrew Crawford or Ian Hawthorne, the costs were now prohibitive at something like $50 per pair ($80 delivered), so he handed around some of the alternatives that he had found, including those with stays or that had a different hinge mechanism.

He said we should look closer at the different types available and consider a group purchase to bring the costs down. If anyone is interested in this idea, please drop an e-mail to me and I will pass it on or you can talk to Paul direct.

Alan Williams showed us all the new products he had available.

Then Len Starkey told us a tale about why he is not allowed to do painting these days, and that they had found an old Singer sewing machine that was over 100 years old. It being in desperate need of a bit of TLC, he started a renovation project to bring it back to life.

He spoke about his success in repairing the original oak veneer by re-activating the old hide glue with an iron and brown paper, and lots of hard work with a cabinet scrapper, together with finding the best way to restore the black lacquer and bring the finish back to life.

A new set of legs from James Street Guildford and he said it was as good as new and ready for the next one hundred years.