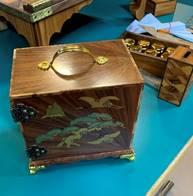 For tonight’s presentation, Martin had brought along his interpretation of the Japanese Incense Ceremony. This is similar to the “Tea Ceremony” and is all about Japanese tradition, aesthetics and what it looks like. 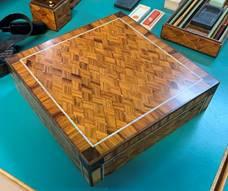 We learnt that this is a game where a group of friends would gather to smell and guess what type of incense was passed around, this means that a person is chosen to record the results, and they would naturally need a special document box and of course a writing table!.

Then there must be marker tiles to identify each player, consisting of ten ebony tiles engraved with individual flowers on one side and numbers on the other, each in its own individual box and then contained together in a box of ten. 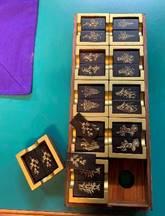 There were so many elements on display that you did not know which to look at first.

As we have come to expect from Martin, each box was beautifully finished with a basket weave veneer, walnut and shell stringing, together with shell dots added to the finished boxes.

In all, more than ten coats of “Cabots” satin polyurethane oil-based finish were applied, leaving a day between each coat, then sanded with 400 micro-mesh on pads or orbital sander, left a week to sink and settle, more coats add if required, and finally sanded with micro-mesh up to 3000 then wax polish applied with a cloth. 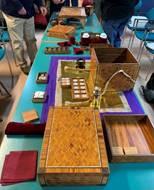 When Martin explained how small the pieces of incense were and that by weight it was four times more valuable than gold, you start to appreciate the reason for the ceremony.

The whole display needed for this ceremony, filled two whole tables showing all the accessories, Martin had given us an insight into the world of Japanese culture, and I am sure many of us would be going home to “Google” more information on what was involved.

Martin acknowledged the help with this project given by Tad Yamamoto and Len Starkie. 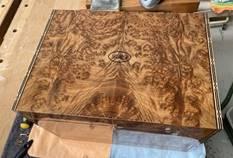 Warren Murphy had brought a couple of Jewellery boxes that he had built during the last three years for his granddaughters. 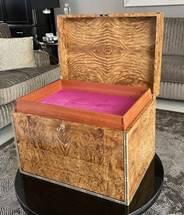 They were two distinctly unique designs, one consisting of a 9mm birch plywood carcass covered with a Tasmanian rainforest native Musk burl veneer, and beading constructed from dyed veneer.

The tray is made from Tasmanian Blackwood, and he used Brusso hardware throughout. The two drawers are secured by magnets and opened using a key with a stronger magnet.

The finish was a combination of “Aqua-coat clear” over shellac, with 6-8 coats of wipe-on-poly followed with fine grade auto polish then super fine resin polish, which has given such a brilliant lustre. 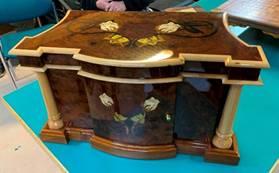 The second box was of a more classical design incorporating marquetry, turned pillars and curved surfaces all finished with a Walnut burl veneer, the carcass and hardware were like the first box.

The finishing touch on both boxes were the inlaid initials, compliments of Len Starkie.

Both boxes were beautifully finished, and the length of time taken with the construction was obvious by the quality of the finished products 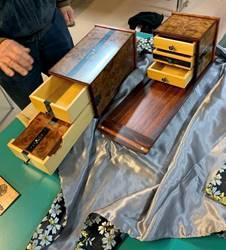 Tad Yamamoto told us that he had wanted a box for his wife’s birthday and had convinced Martin of just what was needed. The result was a box called “Starry, Starry Night.” 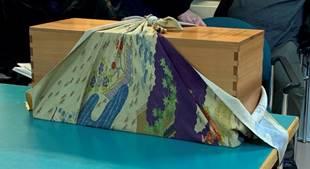 This was again in the Japanese style including black inlay, with gold dust and inserts of different sized mother of pearl and paua shell dots, together with glass cabochon stud earrings, for drawer knobs showing Vincent van Gogh’s painting “The Starry Night”

Once again, the whole box and its tray were parcelled in a “Kimono” style wrapping and belt, then fitted into its own box which was also wrapped as a present.