The meeting seemed to start as soon as anyone came in through the doors, with members wandering off, asking questions and holding discussions around the different machines!

At 6pm Carolyn called us all together and introduced John Andrijic who welcomed us to South Coogee Joinery.

He said that his father had originally started the business, and they had moved to the current location some 80 years ago, making all sorts of joinery and cabinet work. 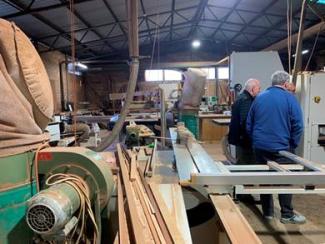 He told us stories about the district and of his early days of working with his father.

In more recent years they had stopped producing the cabinet work and have concentrated on all the different type of joinery possible. John and his brother Tony had taken over the running of the workshop, and these days his nephew also worked with them.

The workshop was full of all sorts of machinery, some dating from the early days, such as the old veneer press, right the way up to the more modern digital equipment.

He described the sort of work that they had completed, they made special moulded timber architrave and skirtings, every possible sort of internal door frame, arches, including matching Carolyn’s 1930’s internal panelled doors, and had even replaced some of the metal window frames from Fremantle Prison, with an exact timber alternative! (If you get locked up these days your mom will not have to bake a file in your cake!!)

We then did a tour of the workshop discussing all of the machinery and what they used it for, plus how often they sharpened the tools and blades, all the usual stuff we ask! 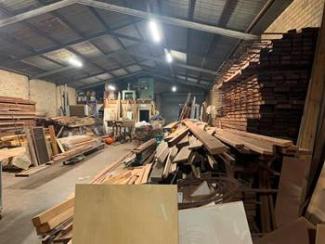 When asked about the varieties of timber they used, he said that these days they used quite a lot of imported timber such as Meranti and Nyatoh, but still used all the WA varieties when called for.

At that point he took us through into the second half of the unit, which was the same size as the workshop, and held a huge quantity and variety of timber, all stacked and drying, ready to be used.

We then gravitated back to the centre of the workshop, where those that had not already found the tea and coffee and the delicious spice cake that John had provided mad themselves a cup and continued asking questions.

We did not leave until nearly 9pm and having had more than 30 members attend, I think everyone had had a very interesting and informative evening.

Our special thanks must go to John for opening the workshop and making us all very welcome.