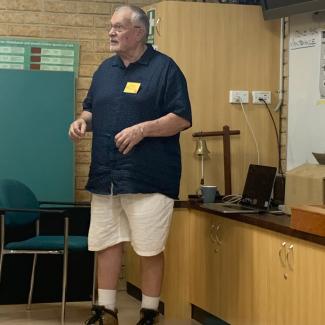 I always work on the principal that if I learn one new thing that I did not know before I came to the meeting, then it was a success.

Now, I understand the principal of thinking outside the box, but sitting there just listening to Kim talking about his design process, not only made me question what I was doing, but threw it out the window.

He talked about being involve with the America’s Cup Ball, and his experience working in the different countries around the world, the designs that he had created and where they had been used, these days he is actively involved with the Manning Men’s Shed.

The direct links between his successful designs and what he saw in nature could be clearly seen.

He spoke about the setting out of a design, and what we already know about “thirds” and lines, but then explained that everything else must radiate from that line.

What did I learn?

He also told us that he found Eleanor Lakelin to be inspirational in the way she worked with wood, and that we could all learn that the texture and the feel of the wood is just as important as what we are making.

Kim showed a short video of her process, which is available here: https://eleanorlakelin.com/process

Thank you, Kim, I am sure you gave us all have food for thought.

After our tea break, we had some of the participants talk about the recent hand cut dovetail workshop. 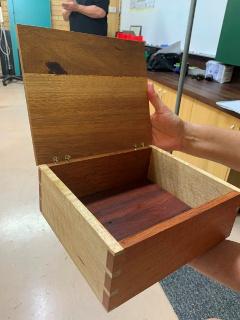 Barry Viner had been promised an enjoyable drive down, but no-one had told him about the roadworks! (The coast road was beeeeautiful Barry). He had practiced the free hand system, but made a jig as soon as he got home and found that he had more success. He said he had started out with quite long lengths of wood. That’s funny, I seem to get that a lot as well? 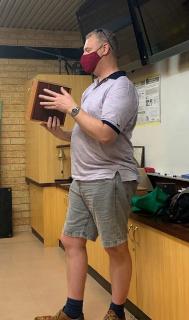 Mark Ellis told us about the work he had done and showed us his finished box.

Wayne Tentori had enjoyed the workshop but said that after watching the video of cutting the dovetails, you needed lots of practice. He also said that given another opportunity he would not have chosen Olive wood as it was not the best for cutting dovetails.

Derek Cohen said he had enjoyed himself and showed us some of the tools we could have used.

He had also brought in a few of his toolboxes and showed us all what hand cut dovetails are supposed to look like. 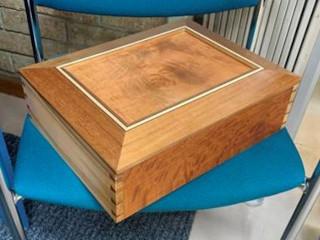 Peter Hall showed us his box and had been successful without a guide, but he had shared a bench with Derek and learned all sorts of tricks, including how useful blue marking tape can be. 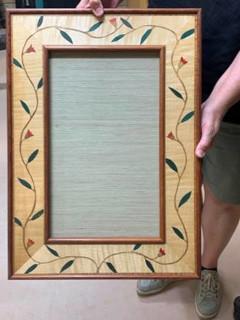 During show and tell, Ian Houghton had brought in a very decorative frame to show us, which he had made using his scroll saw.